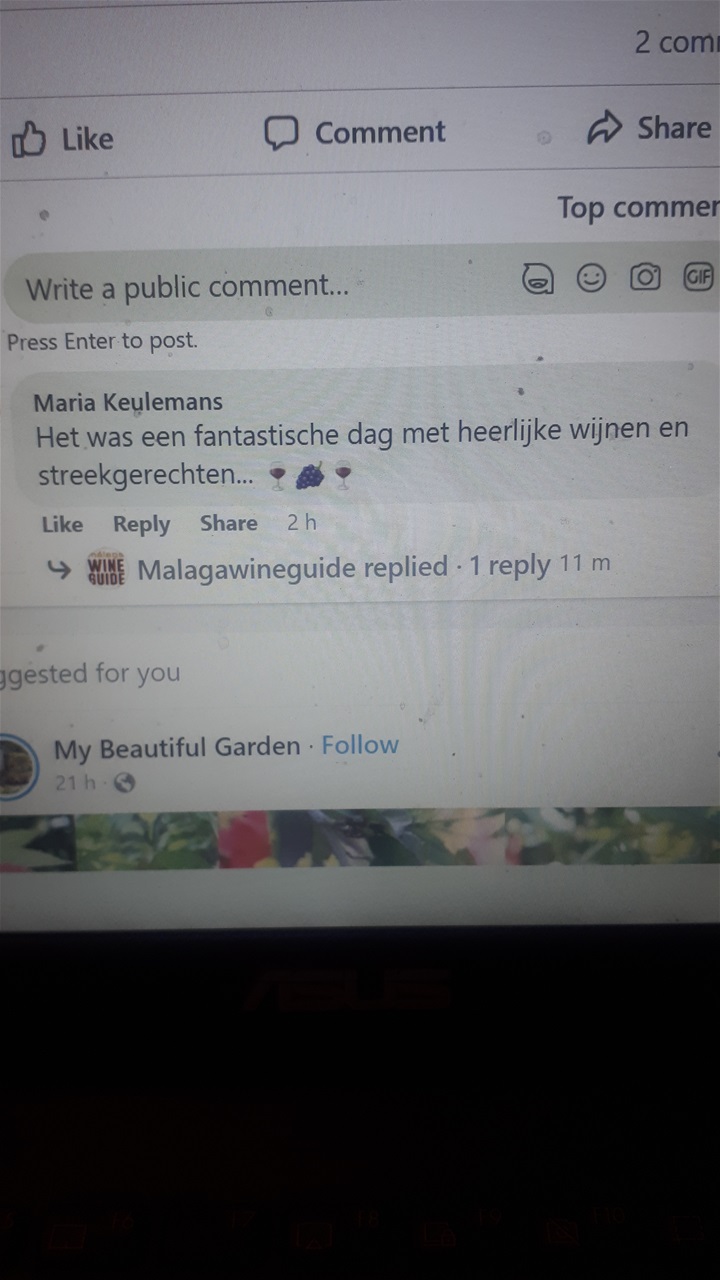 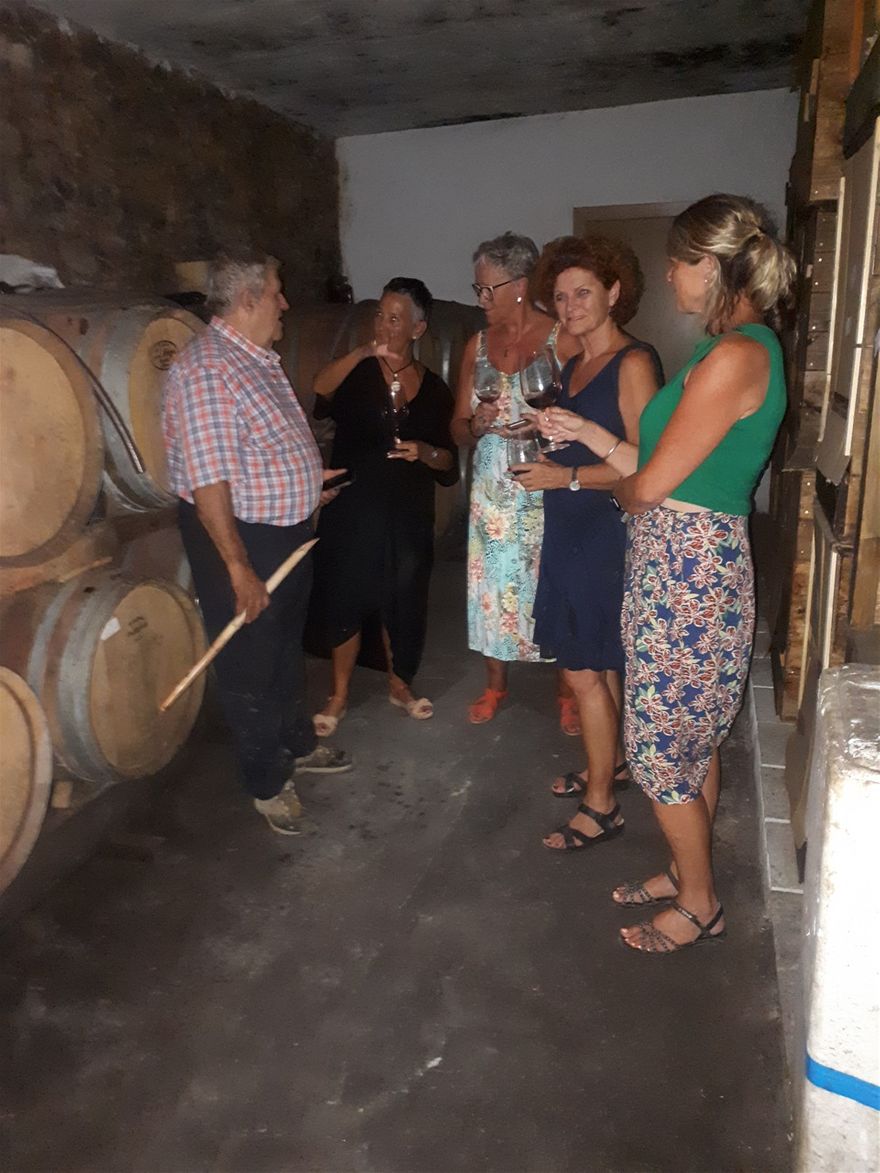 A great afternoon in the Montes de Malaga; an impression

At 11 am, 25th of August 2022, our guests Ellen, Inge, Veerle and Maria are ready at the Plaza de la Merced in Malaga to start this day's wine tour. A wonderful company this time of only women who are clearly looking forward to it. Today's goal? The widest possible introduction to the wines of Malaga and their methods of preparation. On the winding mountain road from El Palo to Olias we enjoy the views and each other's stories. It is always inspiring to hear from other foreigners what brought them to this region.

Bumping over a sand house bordered by old Eucaliptus trees, we arrive at the oldest bodega in Malaga, Antiqua Casa de Guardia. We are received enthusiastically by Manuel the enologist (winemaker). In the sweltering heat we visit the vineyards. Due to the drought, there are too few leaves on the vines, which means that the grapes are excessively exposed to the sun.

The harvest has now been completed, only a few red Syrah grapes can still withstand the stinging rays of the sun. Many grapes are already getting a bit stingy, but we can taste that the seeds are still not ripe. That will make the wine bitter. We rush inside and our noses are attacked by a jumble of typical wine smells. The sunlight enchants the long rows of wine barrels with a light glow. A sensory start to a tasting of Malaga's most traditional wines. The first wine comes directly from the stainless steel vat where the fermentation of the must has just started. It is pure juice from the muscatel grape with very little alcohol. We then zip on a wine that is aged under a yeast layer (Flor) with which the fantastic bone-dry finos and manzanillas are made in Jerez and Sanlucar. It is an experiment of the bodega, this method of winemaking is hardly done in the province.

Then we taste another muscatel wine, but now from the year before, which has therefore already matured for a year in barrel. A young fresh, typical muscatel wine with all its aromatic characteristics such as jasmine, orange blossom and honey. The 'aňejo' variant (with at least three years of oxidative maturation in barrel) shows well what the wood aging does to this wine. The 'trasaňejo' version (with at least 8 years of wood ageing) blows us away with its deep dark color and its impressive palette of aromas and flavors, from raisins, toffee, caramel to chocolate. The Montes de Malaga are known for its perfect terroir for Pedro Ximen grapes. The 'trasaňejo' we taste shows why in all its glory. Where the muscatel variant is more subtle, this Pedro Ximen has a robust but more complex structure with aromas of almond, wood and leather. We are surprised by a wine with its cinnamon-like character (Guinda) that has matured for three years in barrels with cherry stems.

The tasting concludes with Malaga's most famous wine, Pajarete. Pajarete is usually a blend of pedro ximen and muscatel. However, this one is made from 100% pedro ximen grapes. With 120 gr of residual sugar per liter, a sweet wine that is nevertheless mainly drunk as an aperitif in Malaga.

On the way to Bodega Puerto de Leon we see in the distance like a bird's nest on a hilltop, the beautiful village of Comares, popularly called the balcony of the Axarguia. Bodega Puerto el Leon and its vineyards are located at the highest point of the Montes de Malaga at 900 meters. The views over Malaga and the coast are phenomenal. We have already tasted 8 wines and it is high time to strengthen the inner man. We continue our exploration of the wines of Malaga, with cheeses, embutidos, 'lomo and manteca', tortilla and the famous garlic almond soup 'ajo blanco' as a welcome addition to the table of the cozy tasting room. The first wine is a 'seco trasaňejo' Pedro Ximen from bodega Puerto de Leon, a bone-dry wine that is perfect as an aperitif. This was the type of wine for which the Montes de Malaga was especially known and whose production is declining more and more, probably because the general public is increasingly looking for lighter, less alcoholic wines. The dry moscatel wine 'Mountain Blanco' from the well-known Spanish winemaker Thelmo Rodriquez is a good example of this: extremely modern, quiet, not fortified wine with beautiful moscatel expression.

Then we are impressed by a 100% Viognier in very small production made in-house by the Manuel the winemaker of Antiqua Casa de Guardia. A hearty food wine with character. The switch to the second wine from bodega Puerto de Leon is easy to make, cosecha, a young sparkling fruity cabernet sauvignon without wood aging with buttery tannins. We drink the following 2019 Cabernet Sauvignon directly from the barrel and already has a completely different heavier character due to its wood age. It forms a nice contrast with the extremely modern soft blend of syrah, petit verdot and cabernet sauvignon (2016) from bodega La Capuchina.

We end the day with two sweet wines that are each other's extremes in character; Piameter of bodega Dimobe and Dunkel of bodega Malaga Virgin. The first is a 'naturalmente dulce', which means that no action has been taken in any way to influence the sugar content and fermentation. The juice of late harvested grapes is fermented, leaving enough residual sugar to keep the wine sweet. The second contains 'arrope', 'au bain marie' boiled-down must that extracts moisture and increases the sugar content. The first is light yellow in color with a wonderful balance between acidity and sweetness. The second is deep dark brown, very sweet and syrupy in character with a nice bitter aftertaste. This underlines the versatility and quality that the wine world in the province of Malaga has to offer.

Ellen, Inge, Veerle and Maria descend again to Malaga via the Camino de Colmenar, this time along the west side of the Montes de Malaga. A privilege to have welcomed them as guests for an introduction to the wines of Malaga. A magical combination of tradition and innovation.