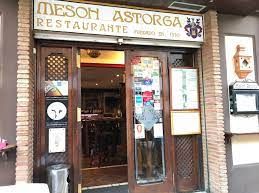 TRADITION, TAPEO AND BEER FROM SHERRY BARREL AT 'MESON ASTORGA'

Impressive wine list with many wines from the province

Away from the increasingly uniform center of Malaga, we opt for a classic in Malaga; Meson Astorga, in Cruz Humilladero, the area behind the bus and train station. We settle down at the bar, where Malaguenos pass by to eat a tapa. Fifteen minutes and they are gone again. This time our eye is not immediately drawn to wine, but to a beer from the Alhambra brewery in Granada, which is aged in the old sherry casks from Jerez. We take the Amontillado (there is also Pedro Ximenez and Palo Cortado). With these beers, the Alhambra industrial brewery is trying to take advantage of the success of the many traditional micro breweries that have been experimenting with rum, whiskey, port and wine barrels for some time. Since these barrels have been used for many years, they mainly release the aromas of the drink that was in it for the beer, so little or no wood aromas. The bitterness of the beer goes wonderfully well with the hidden sweetness in our first tapa; butter-soft carrilladas (pork cheeks) in red wine. At Meson Astorga, choose especially delicious classics! Served in generously sized tapas, media or raciones. Such as the bone-melting 'rabo de toro' or 'chivo malagueno' (goat).

From the impressive wine list we choose the red wine Ramos Paul 2006 from Ronda, a blend of Tempranillo (55%), Cabernet Sauvignon (25%), Syrah (10%) and Merlot. Velvety wine with soft tannins. Full of forest fruit, blackberries and cherries that stand upright after so many years. Barrel aging (18 months) in perfect balance with that. Hint of tobacco, chocolate and pepper. Elegant and complex, anything but heavy. This wine is one of the very best red wines produced in southern Spain.

Beautiful wine and fine classic tapas, Meson Astorga is more than worth the 'detour' (about a 20-minute walk from the historic center)